A Growing Problem
Baby Boomers—a term used to refer to individuals born in the United States between 1946 and 1964—are now approaching old age. Surprisingly, these older adults are using illicit substances in a pattern not seen in prior generations of older adults, including developing substance use disorders (SUDs) at increasingly higher rates; in previous generations, the prevalence of such disorders typically lowered with advancing age.

This article discusses how to recognize and treat SUDs in older adults. Alcohol is the most commonly used substance among older adults,1 and there is a largebody of literature describing the identification and treatment of alcohol-related disorders in these patients. Therefore, this article will instead focus on older adults’ use of illicit substances, including marijuana, cocaine, and heroin.

Epidemiology
Prior clinical data regarding substance abuse in older adults focused on alcohol, prescription drugs, nicotine, and caffeine.2 Inthe past, compared with younger adults, older adults had lower rates of alcohol and other illicit drug use.3,4 Baby Boomers appear to be defying this trend.

More recently, a 2014 study of geriatric patients found that of the 1,302 patients age ≥65 admitted to a Level 1 trauma center, 48.3% had a positive urine drug screen.6 Someresearchers have estimated that 5.7 million older adults will require treatment for a substance use disorder in 2020, which is roughly double the 2.8 million who had an SUD in 2002 to 2006.7

Risk factors and patterns of substance abuse
Individual, social, and familial factors can contribute to substance use and abuse in late life. The Table1 outlines some of the potential risk factors for older adults associated with the use of illicit substances. Substance abuse among older adults can be divided into 2 broad categories: early onset (starting before age 50) and late onset (starting after age 50).8 While data are limited, in general, early-onset use is a more common pattern; late-onset use represents an estimated <10% of substance use among older adults. The factors that lead some adults to continue substance use in late life, or to begin substance use later in life, have not been thoroughly evaluated. 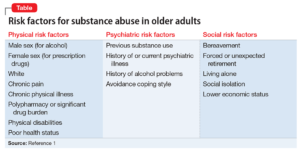 Although older adults may abuse a wide variety of illicit substances, here we describe their use of marijuana, cocaine, and heroin.

This site uses Akismet to reduce spam. Learn how your comment data is processed.